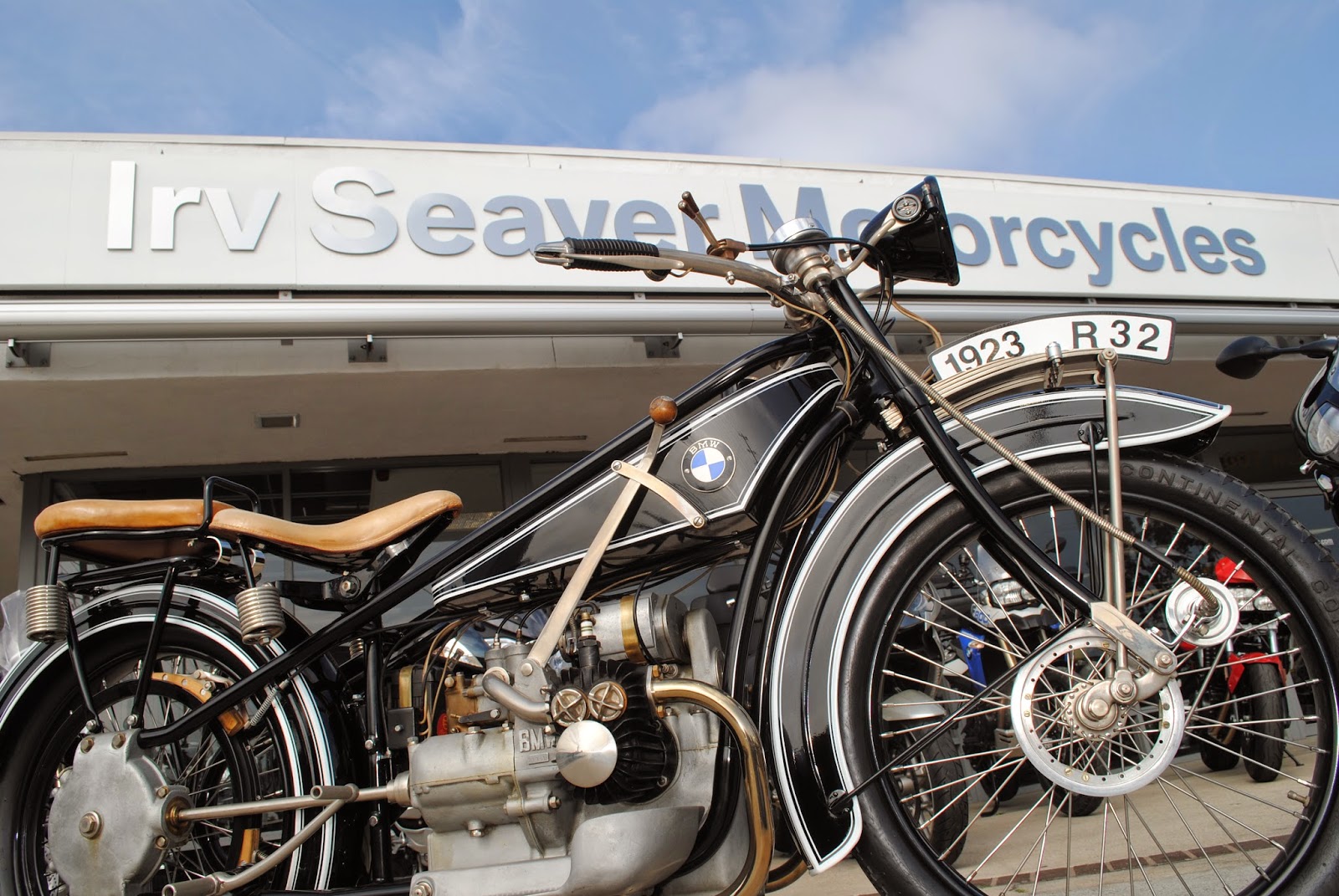 by Jim Foreman and Brian Bell


A Good Beginning for the Best Motor Cycle in the World


When BMW was incorporated in 1918 it was already the product of several pioneering aircraft motor companies merging. The roots were planted as early as 1911 by the Otto family that had made the first four cycle engine in 1876. This factory by the Munich Airport produced the most advanced and refined engines through World War I and looked to continue its upward trajectory into peace time.  The BMW aircraft engine set a world altitude record in May/June 1919 showing their capabilities.  The record was established just as the June 28th implementation of the Treaty of Versailles forbade German manufacturing of articles of war, all drawings were confiscated and production halted. This proud company made furniture, train parts and motors for agriculture, boats and motorcycles, reportedly literally melting down armaments into farm tools.


As the Treaty of Versailles gradually lifted, BMW was granted the German license to build the Pratt and Whitney aero engines, and stop-gap work ended. But a “BMW” of motorcycles had an appeal, and BMW head engineer, Max Friz, turned his hand to the rest of the motorcycles, refining the motor that had been used by others, turning it across a double cradle frame, bolting the transmission directly to it and driving the rear wheel with a very clean, safe and refined shaft. It can be debated that the BMW R32 was the first true modern motorcycle, other than an evolution of a powered bicycle.


A surprising amount of architecture and features used in the R 32 are still present, endearing and beneficial, 90 years later in the R nineT. Beyond opposed twin engine design and drive shaft, the R 32 through R nineT boxers use a simple, durable, clunk free automotive style clutch, but beyond any auto design they move the troublesome throw out bearing to the rear cover of the transmission. The round head light, and for that matter, all electrics, are still Bosch.  Even the controls, not standardized by 1923, are similar, left hand clutch, right hand and foot brake and the throttle on the right (for example, Indian persisted with left hand throttles and Harley-Davidson did not have a hand clutch until the 1950s). 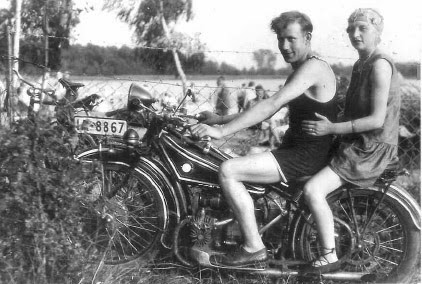 Over 3,000 R 32s were produced from Nov. of 1923 through 1926. That was a very good run for that era. Of those, the only estimates by BMW of the series I to be produced is “a hand full”. Though a premium product, in what was perceived as a utility market, it sold well and was warmly received. The R 32 found many uses from racing to police work and naturally for the true motorcycle enthusiast.


In 1959 a young Orange County native named Evan Bell was recommended to Irv Seaver Motorcycles and was given a job as a line mechanic. Though BMW was only a side line in Irv’s Santa Ana dealership, Evan quickly grew to appreciate the engineering, design and quality of the bikes. Thus began a relationship still deepening to this day.


The passion for restoring bikes was completely natural for this drag racing, dirt bike riding farm boy. Within 2 weeks, he had a vintage 1932 BMW R2 to tinker with and within a month, he was the proud owner of an R50 to ride. In 1962, Irv sent Evan to the BMW factory in Munich for training, a treat that still brings a smile to his face. His sincere enthusiasm for the marque and reputation grew.


Evan’s career with Irv Seaver Motorcycles continued to grow also. Working his way up to master mechanic, parts manager, salesman, sales manager, and to general manager in 1969.  Evan finally became the owner in 1979. Throughout, his dedication to BMWs, old and new, grew. In 1976 Evan saw an ad in the Vintage BMW Bulletin, buried on page 10.
For Sale: 1923 R32, possibly the oldest BMW model in the world. The 41st motorcycle to be manufactured.  Price CA. $9,000. 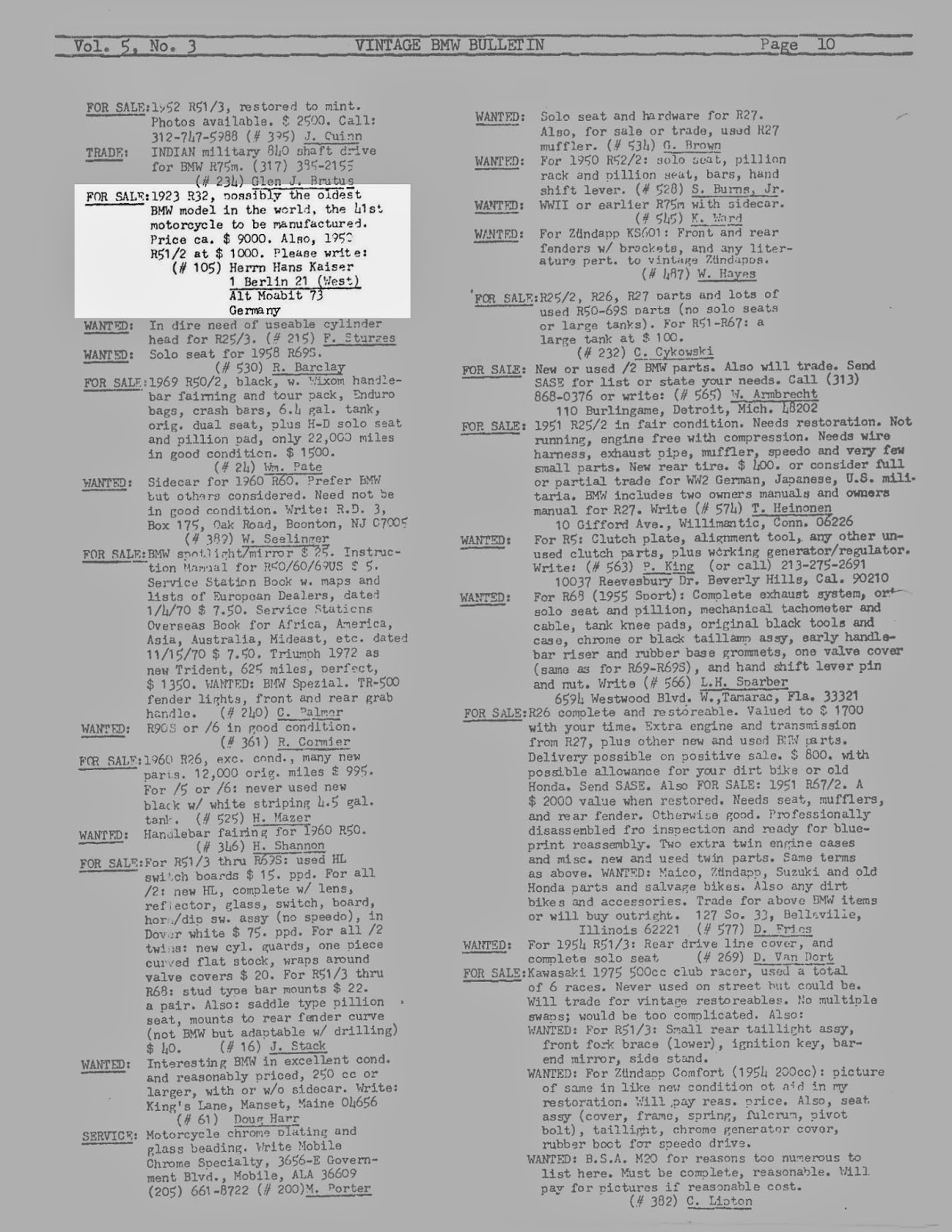 Though the “Vintage BMW Bulletin” was an American club, the motorcycle was listed “for sale” by Hans Kaiser in (West) Berlin, Germany. Realizing he’d be going to Berlin for a BMW sales event, Evan wrote to Herr. Kaiser and arranged to see the bike.


The R 32 was complete but rough. As a restoration had been started, Evan was thankful for the as-found photos. They showed a bike that was honest, and surprisingly intact, though obviously disassembled many years previously. It was a great starting point.


Evan arranged payment and had the bike crated and shipped back to the states. Upon arrival, it was assembled to evaluate its true condition and needs. Indeed, as listed, this bike was the oldest BMW known at the time. In fact, it was the only series I of the first model known. From 1924 through 1926, the Series II (/2) R32 gained a front brake, four years before the first American bike to get one, a timed engine breather and a shock coupling in the drive shaft, among other details. To date, BMW has only acknowledged one older bike, just recently.


A “no deadline” restoration proceeded. It was aided by the purchase and restoration of a 1924 R32. This bike was done much earlier and rented to BMW for display at the world trade center in the early ‘80’s, for the ’88 new bike brochure and use at the International Motorcycle Shows. It also was featured in some of the Guggenheim Museums’ “Art of the Motorcycle” shows.  The 1924 R 32 was sold during our remodel and expansion in 2012. Evan likes to joke that it paid for our concrete parking lot.


The restoration of the ’23 was as close to a ‘no compromise’ job as the real world will allow. Southern California is home to many world class craftsmen, and Evan knew many of them. Machine work beyond Evans’ Maxi Mat lathe and mill was handled by good friend (and Ernie Ball tool and die makers) Ron Saul and Dan Norton. Cast aluminum repair and general welding artistry was performed by Jim Shirley. Original fenders and tanks straightened by Richard Stroman, pin striping was laid on by Damon Richie.  Trips to Veterama in Germany by Evan and friends found details down to new, old stock spark plugs.


The R 32 was finally completed in 1998, coincidentally its 75th birthday.  It was presented at the BMW MOA rally in Missoula, Montana, earning the very first Vern Mitchell Award. From then until a very targeted invitation to the granddaddy of concourses, it has never failed to take top honors where ever it was shown, from local charity events to the Legend of the Motorcycle show at Half Moon Bay. Evan did not feel too slighted when it did not place at the Pebble Beach Concourse, we were dinged for reproduction tires and they actually noticed some stainless steel that should have been nickel plated steel. If anyone has a perfect set of period, clincher Continental tires we would appreciate a call.


Bopping around the Greens at Pebble Beach was the classiest place Evan has ridden his R32, but definitely not the only one. He normally starts it by hand, in deference to the nickel plated kick starter. The compression release allows priming; if that is not enough there are priming taps directly into the cylinders. The longest and fastest ride was actually on the 1924 R32 from down town Mariposa, CA to the fairgrounds. It cruised comfortably at 60MPH (96Kph) on the highway.  BMW claimed the top speed was 100Kph. The R 32 proved to be a bit of a handful around modern traffic, with an aircraft style two lever throttle and a completely manual spark timing.


On any business day, Tuesday through Saturday, the R32 can be seen, upon request, at Irv Seaver Motorcycles in Orange, California. It resides upstairs, with Evans’ other “keepers”.
©2015 Jim Foreman 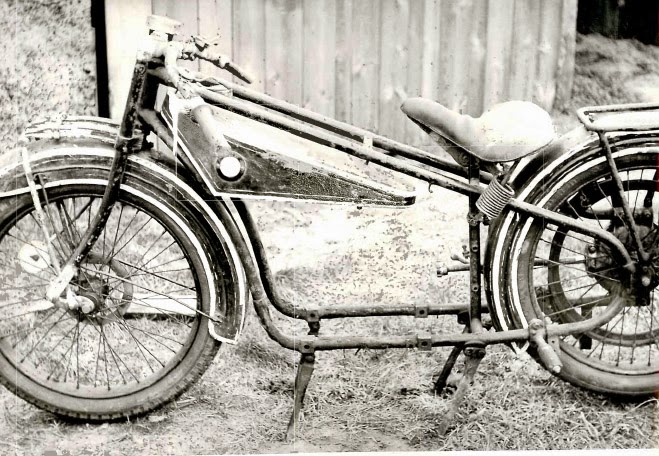 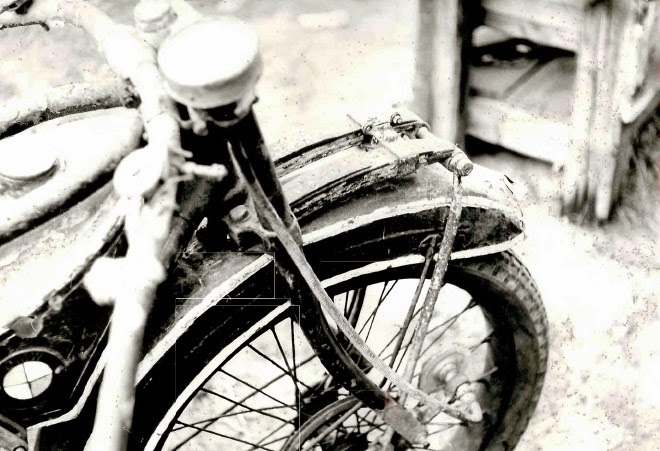 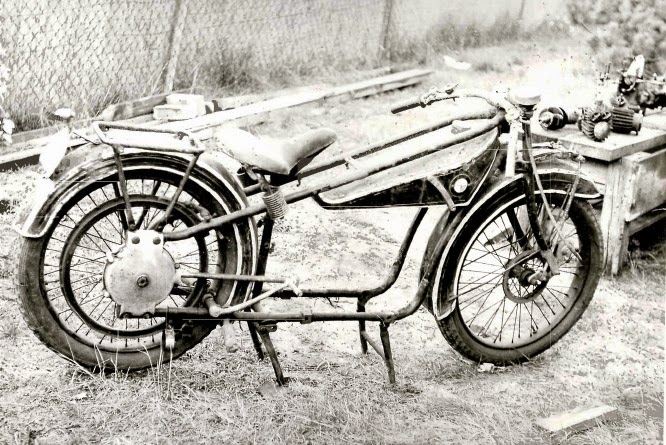 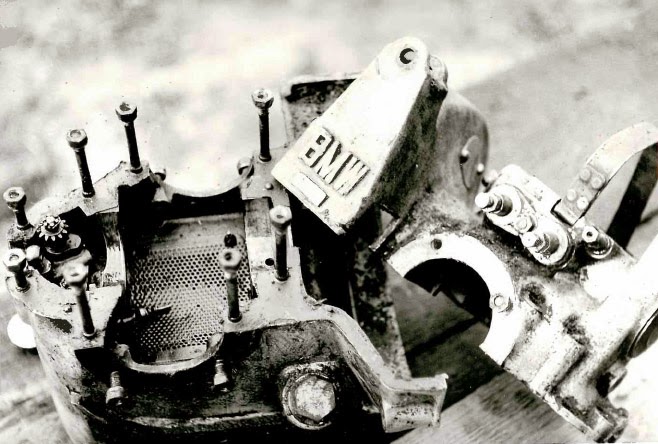 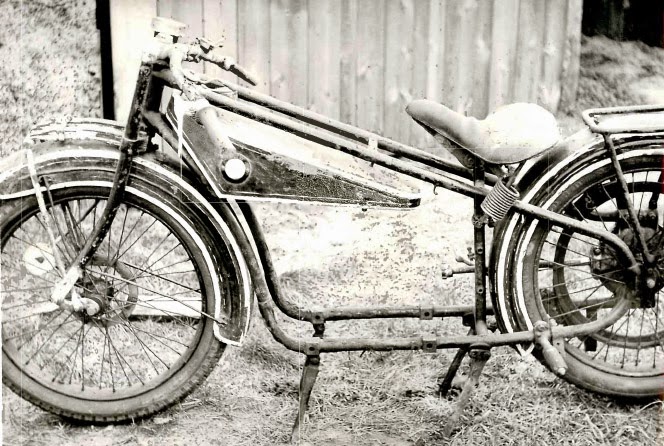 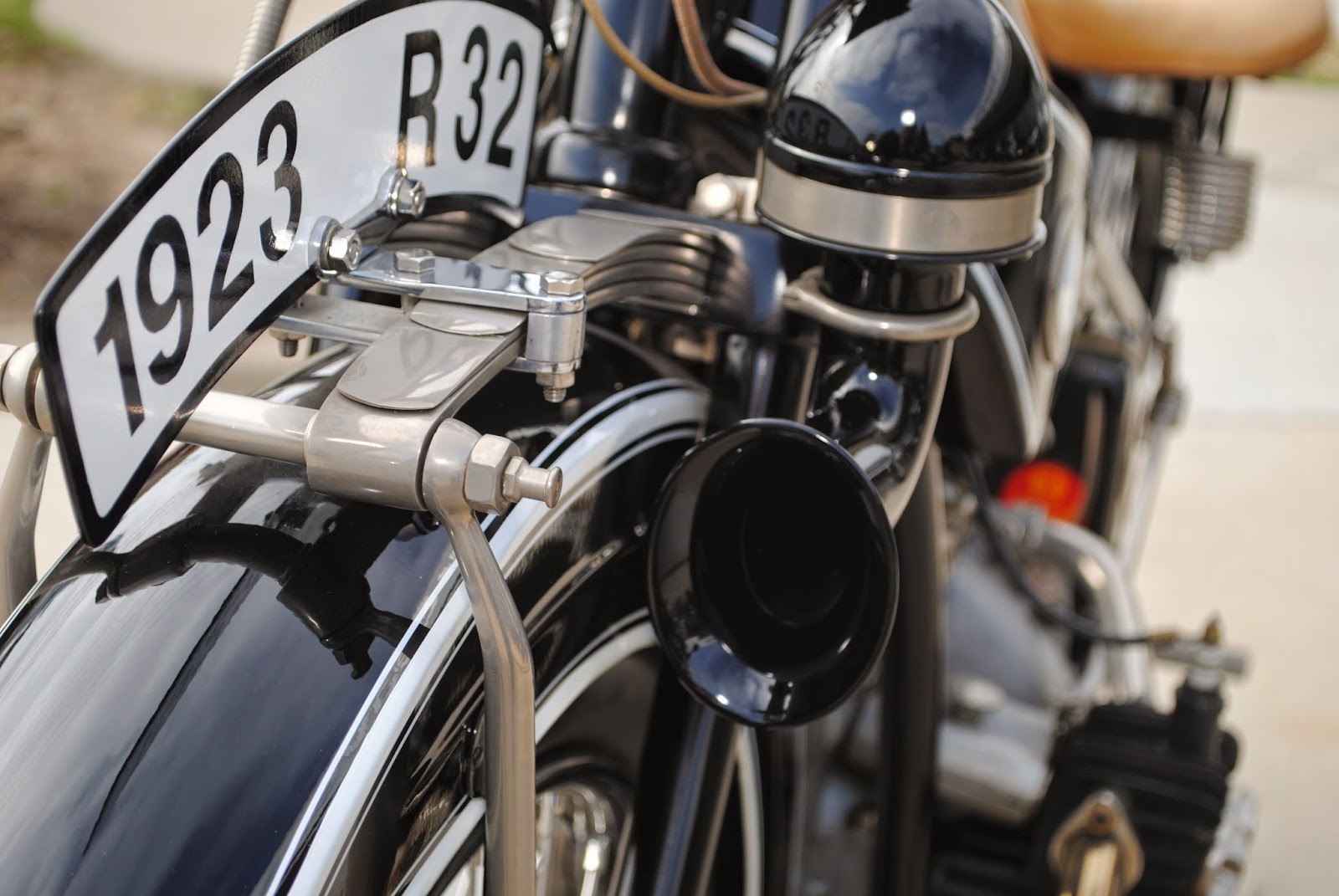 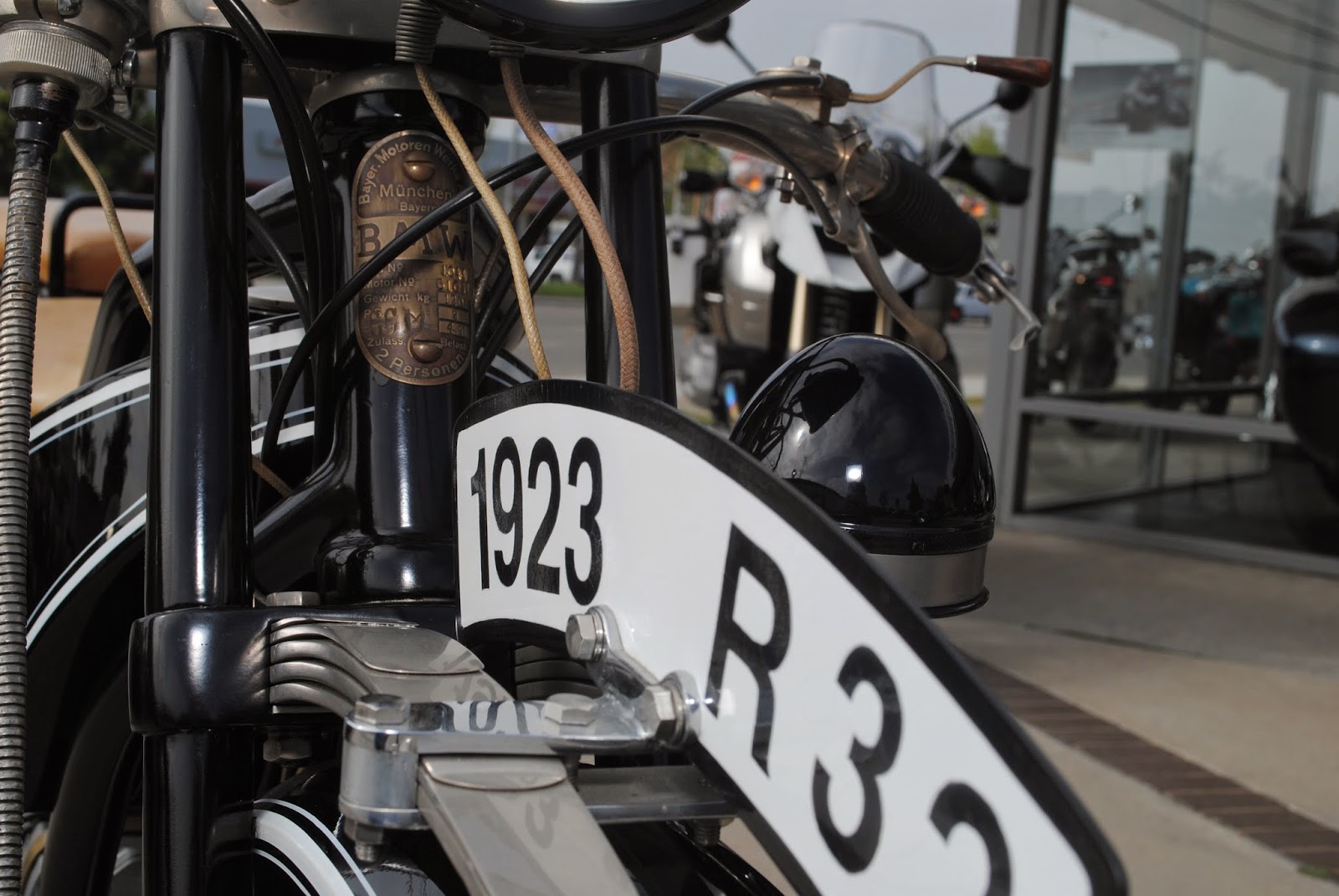 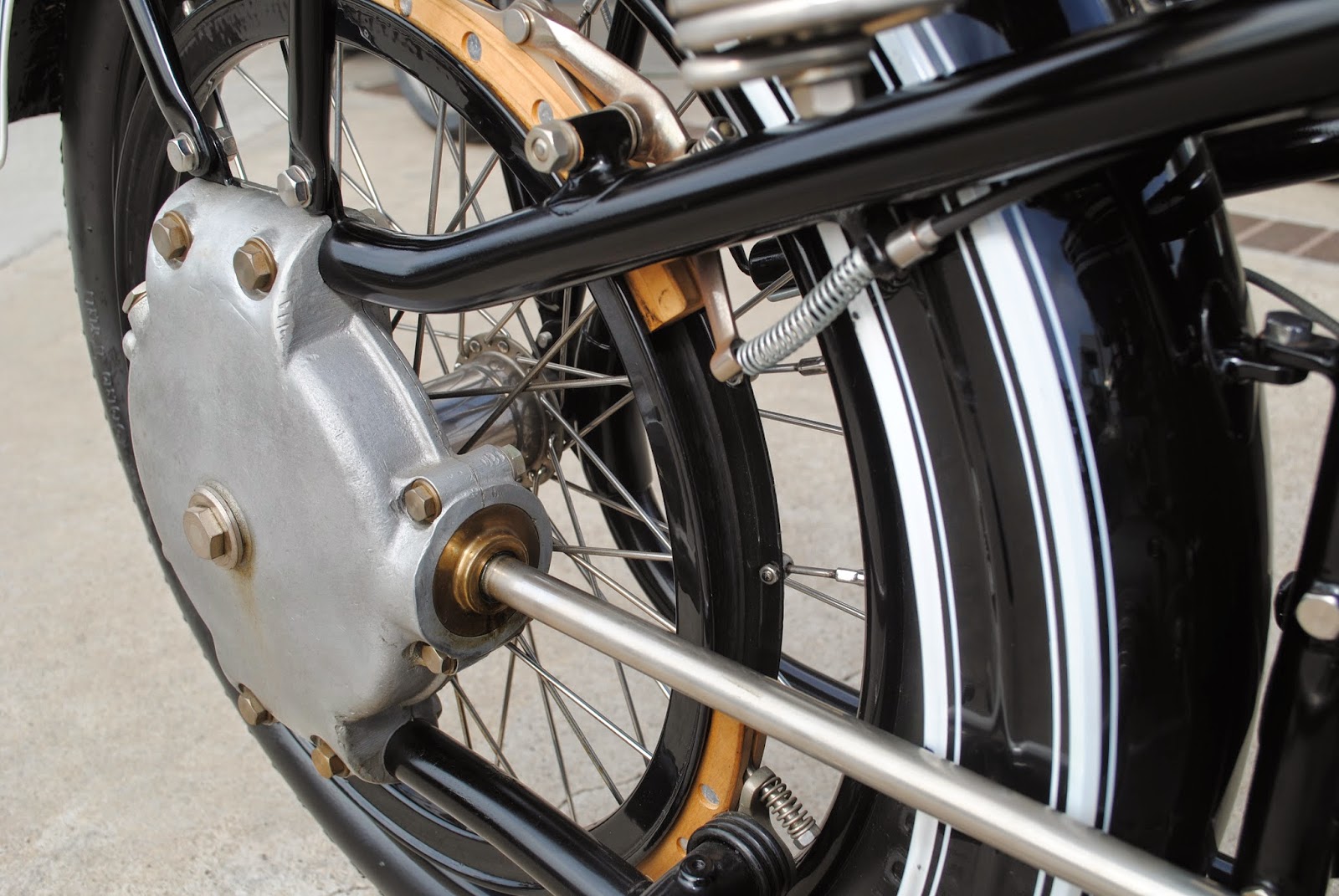 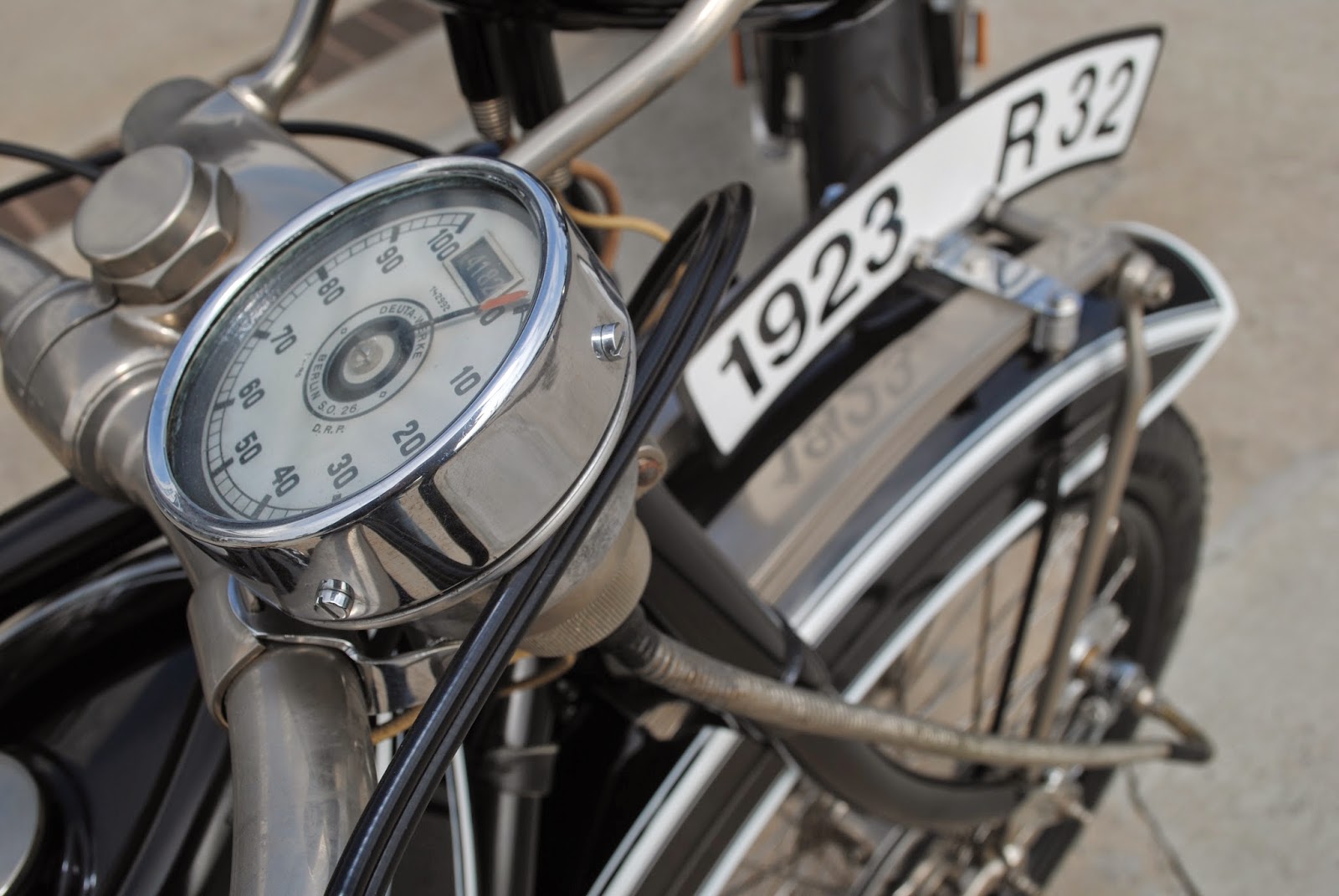 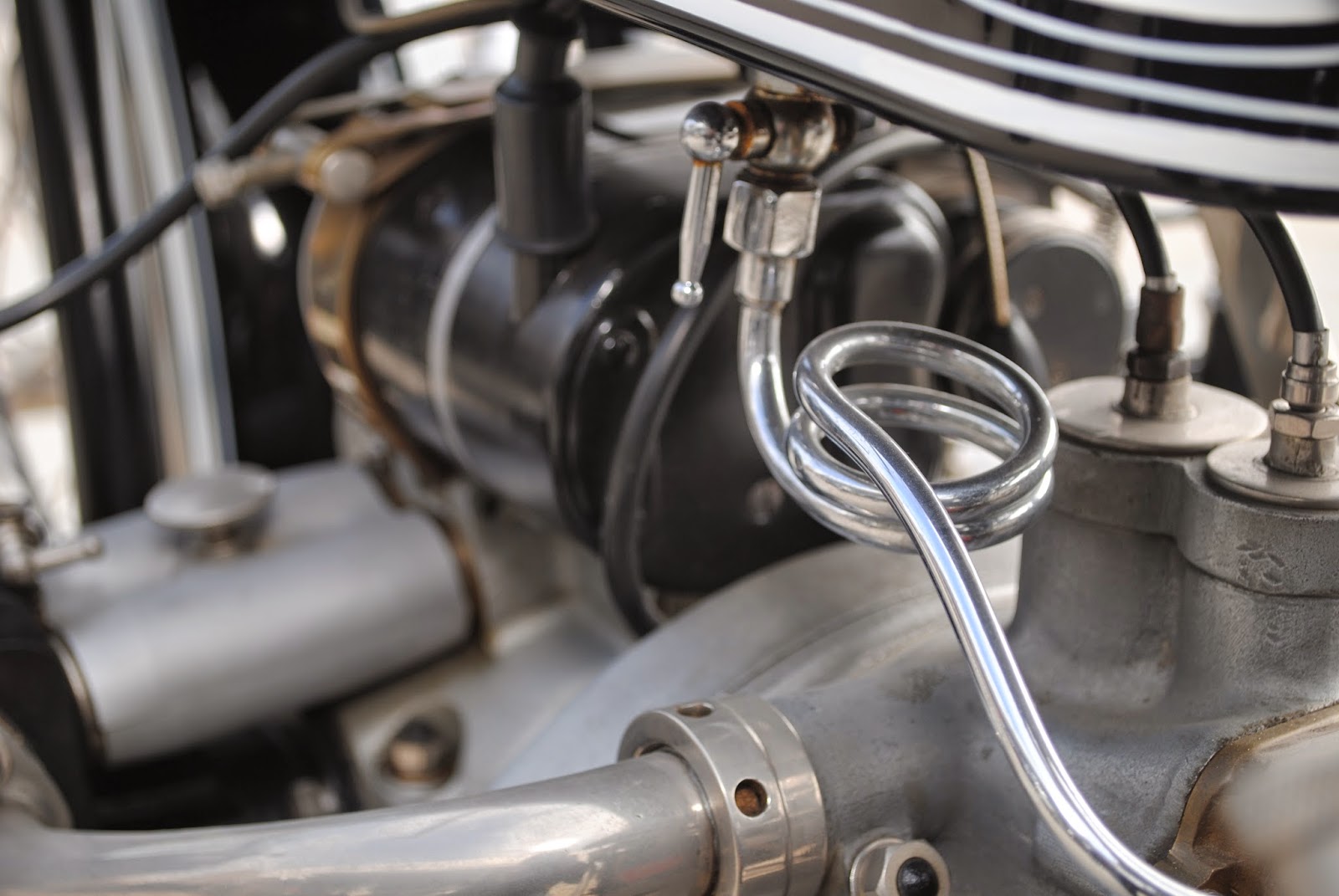 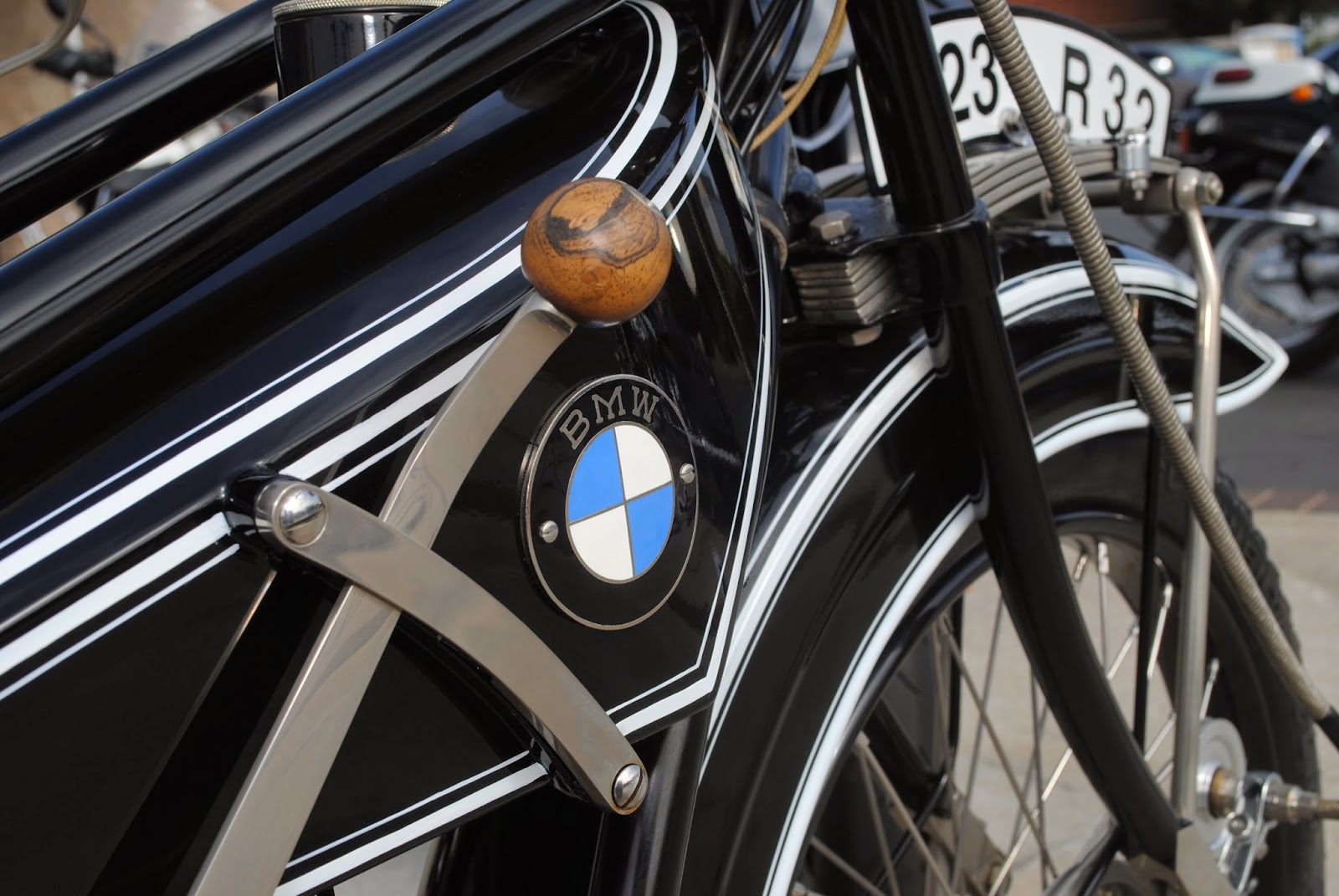 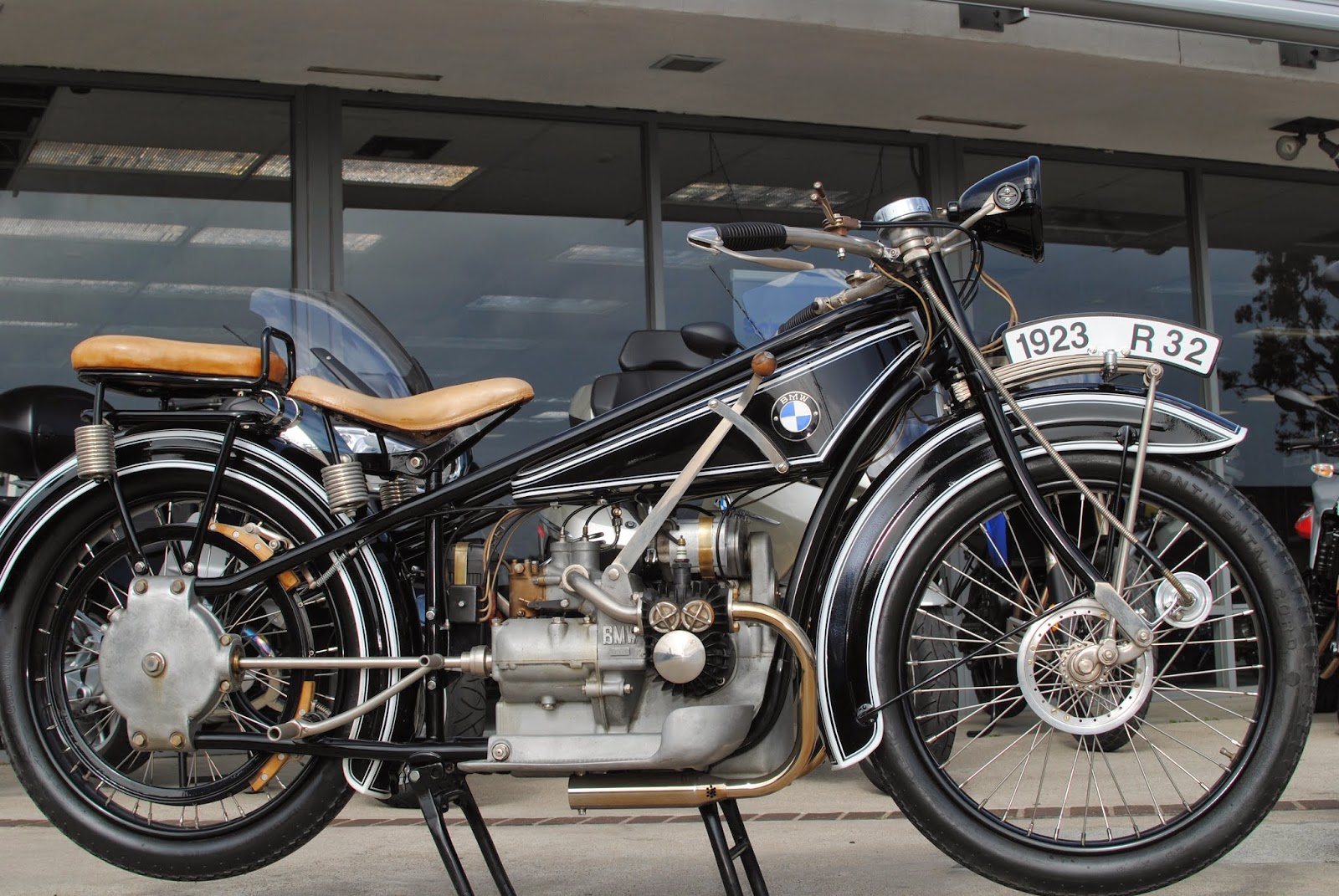 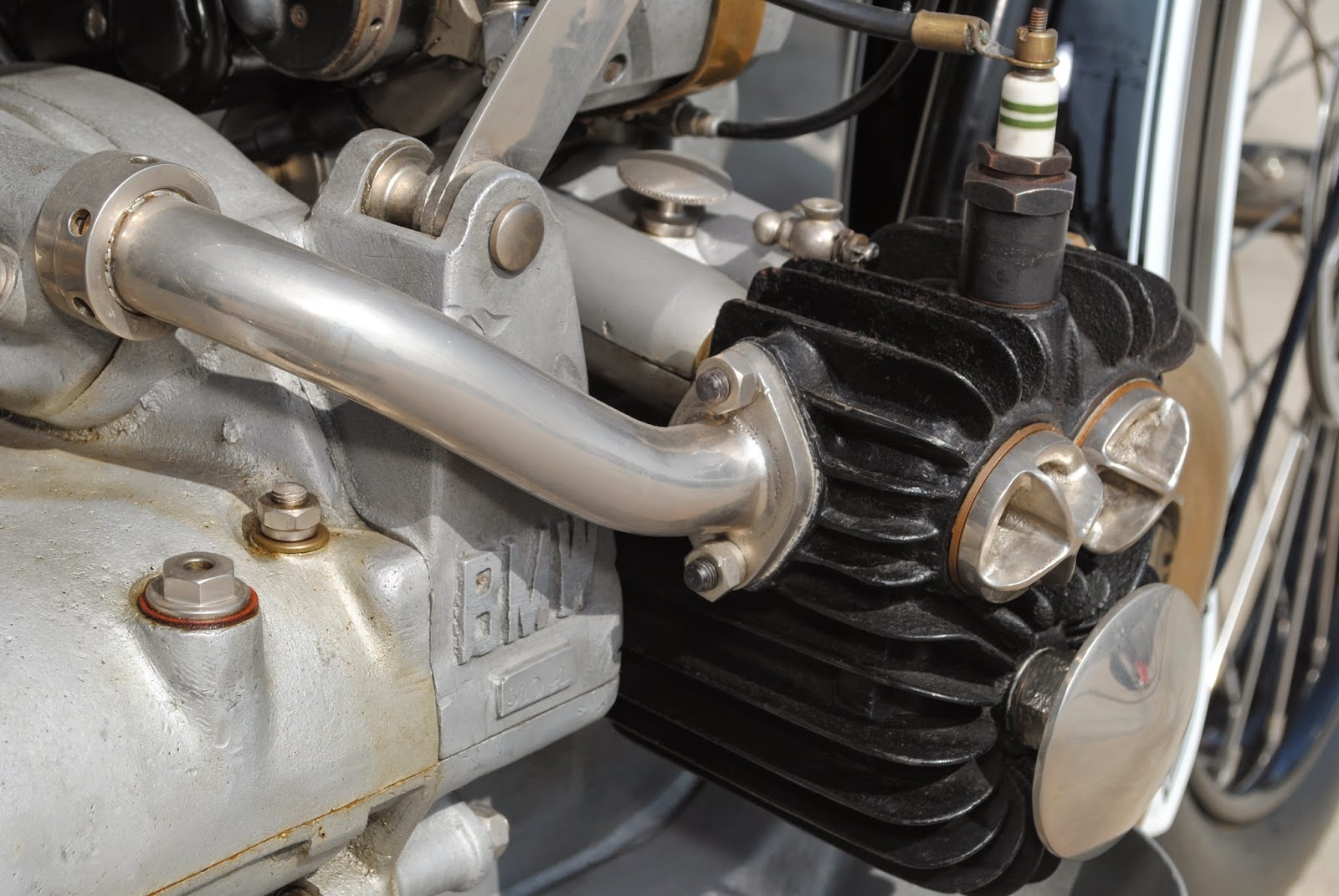 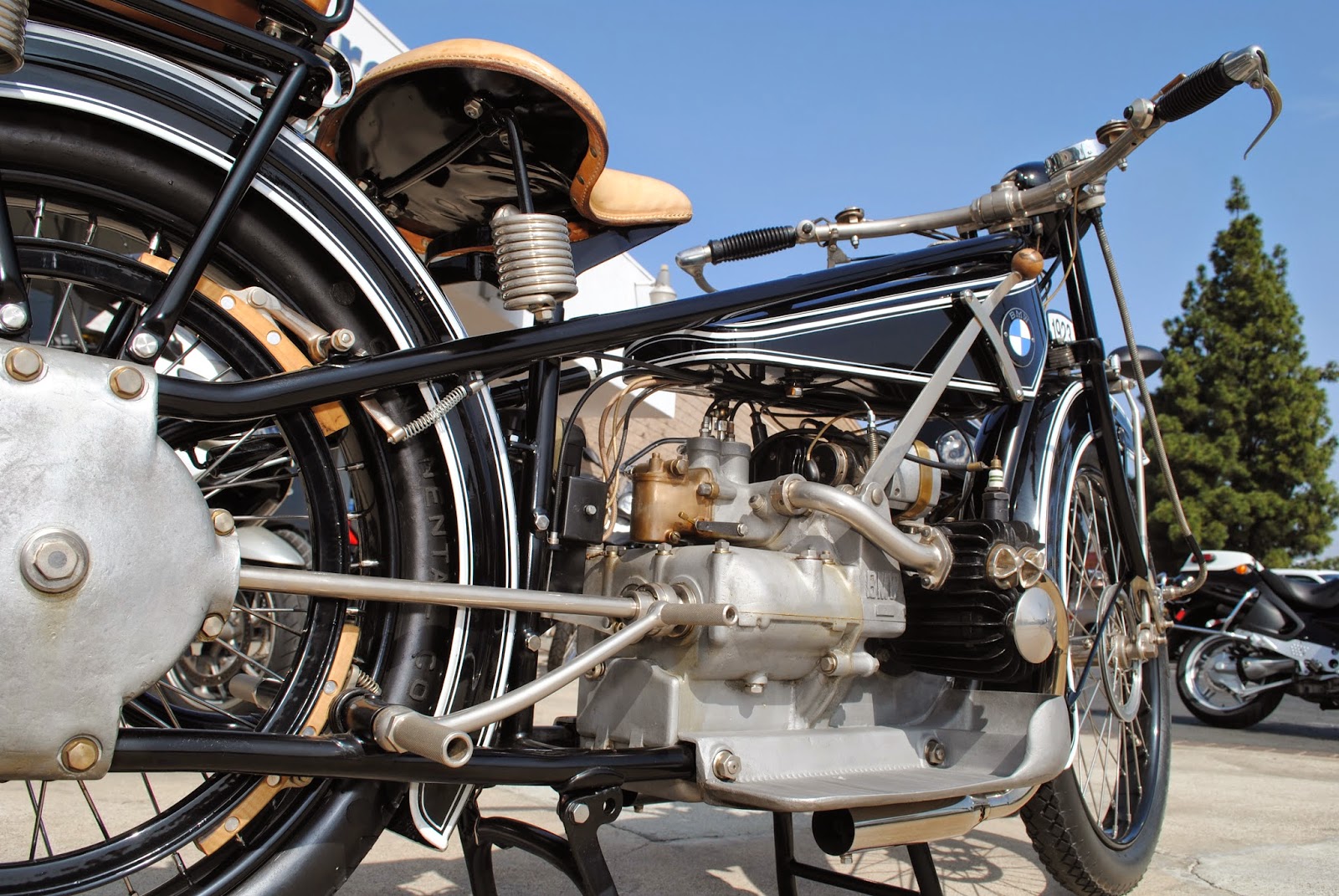 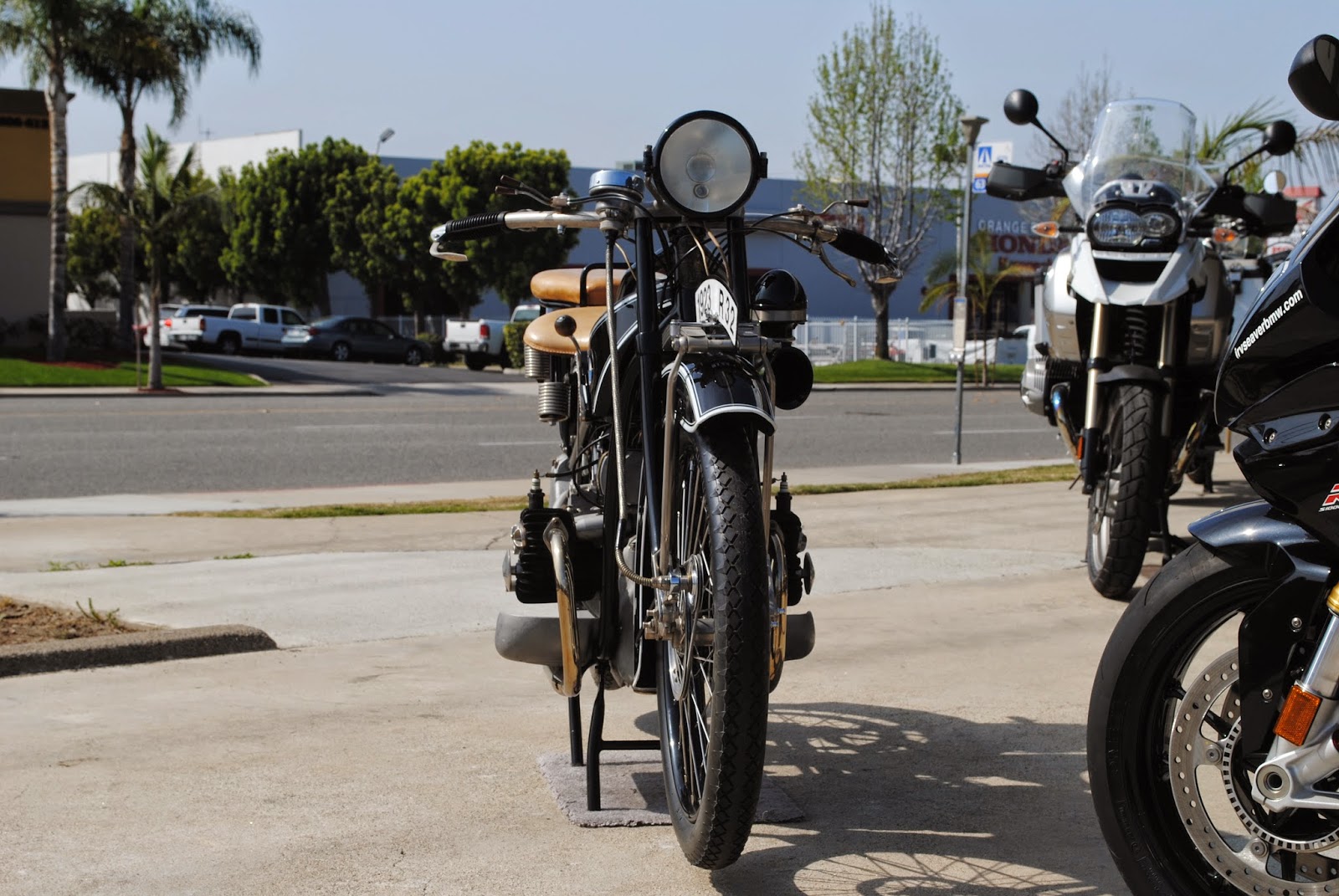 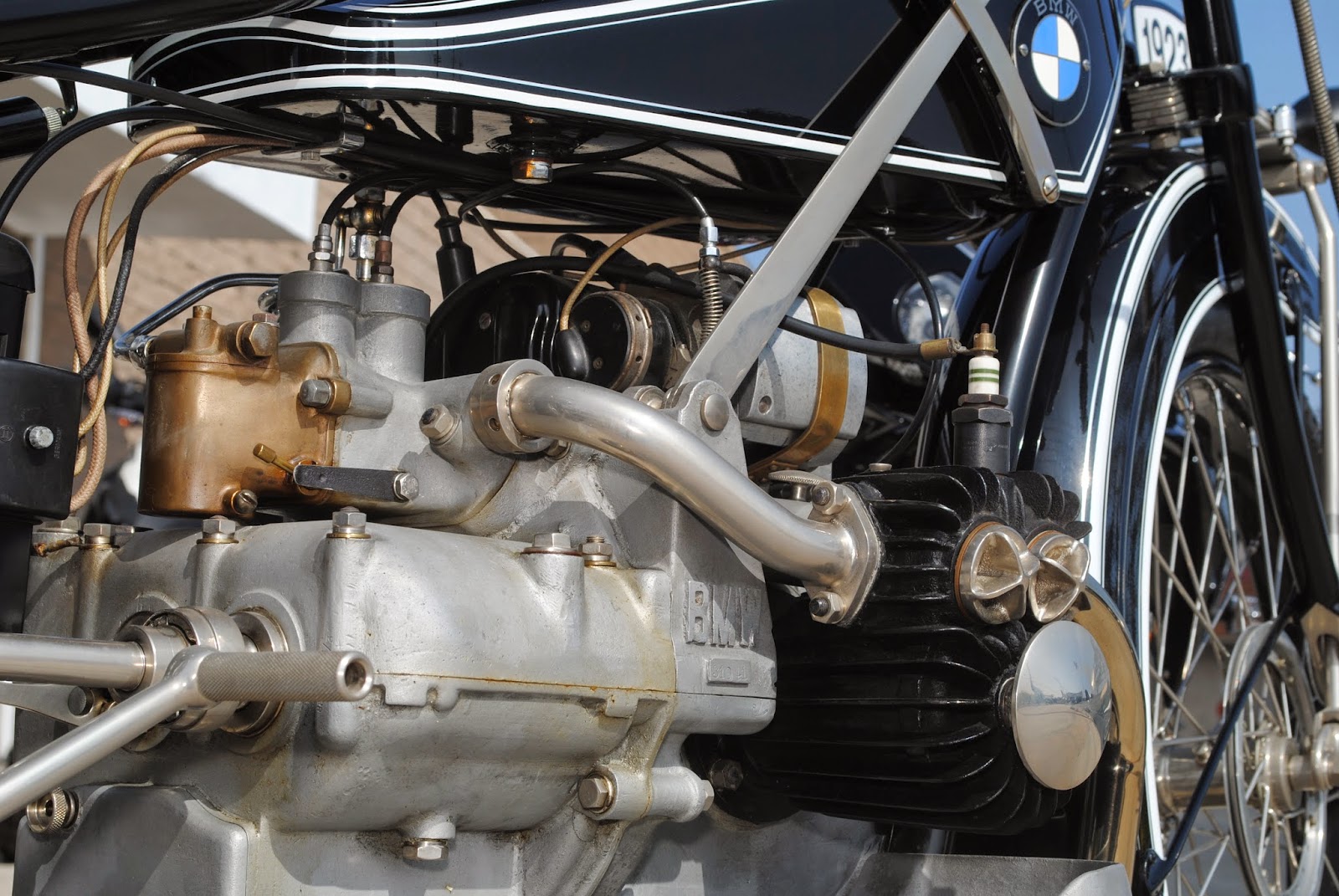 Posted by Irv Seaver BMW at 1:06 PM No comments: