BMW, Distilled to Its Essence by the Great Depression 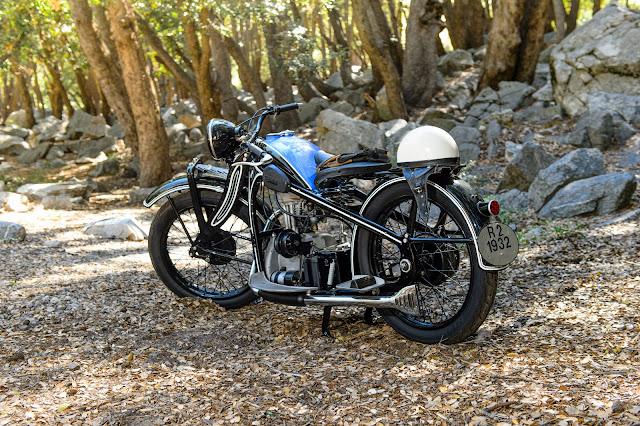 History of the BMW R 2

A product of the Depression, it was made to fit a market created when the German government eliminated the license requirement on sub 200cc bikes to increase sales. Economic stimulus through less government, what a concept! 17,825 were sold in five series from 1931 to 1936, the rarest being the series IIa of 1932 at only 2,015. That total number was only surpassed in the vintage-era by the 750cc workhorse R12, made from 1935 to 1941. As good as those numbers were for BMW; at over twice the price of other bikes made for this market, it was still very exclusive. DKW reportedly made over 200,000 of their sub 200cc bike. NSU, Zundapp, D-Rad and many others also made bikes for this class.

It is tempting to use this class to “stereotype” brands. The DKW two-strokes personified cheap and cheerful. NSU is thought of as advanced and efficient. The later Zundapps, which used the same frame as their 400cc and 500cc opposed twins, and 600cc and 800cc opposed 4 cylinder bikes, exemplified rugged Teutonic overkill. So what does this little R2 say about BMW? To add perspective keep in mind, BMW had “owned” the motorcycle speed record since 1928, quickly retaking it whenever their last mark was topped. BMW was used by the German national team to win numerous gold medals in the I.S.D.T. over the previous ten years, and over the next five. The aero division was also in the news with many records and firsts. Consider features cleanly integrated into this bike absent or tacked on to other bikes of the era like keyed ignition, shaft drive and the way the speedometer is recessed into the tank, with the tank cleanly blended into the frame. This particular design was soon copied by Gnome-Rhone, Zundapp, and many others. BMW hired American engineer Edward Budd (12/28/1870 – 11/30/1946) for the frame design, first seen in 1928 on the 750 cc R11 and R16 twins and a distinct design for the singles from 1931. The tooling required for its production motivated the purchase of Dixi Weke, the German franchised producer of the Austin 7. An English design, the Austin 7 was produced all over the world, from Russia to Japan. In fact, Carriker’s was the Orange Co. distributor of the American Austin (later known as the Bantam) in the 1930’s. Budd also designed the ground breaking Chrysler Airflows and built the early Ford GPW Jeep bodies, not to mention bodies for many German vehicles. It was not until 1933 that BMW produced a car of its own design.

The R2 also featured a recirculating, filtered oil system cleanly integrated into the engine cases, as featured all the way back to BMWs first model in 1923 (Evan has restored two R32’s, including a series I, both were still on their standard bore). The first American bike I can find with oil return line to the tank was in 1936. Other features first seen on this BMW included a true air filter (rare on many bikes well into the ‘60’s),’safety rims’ (as soon made standard on German bike by the T.U.V.) and a tunnel case engine design (a very elegant and as far as I can find unique BMW design, utilized through 1995).

So what does this BMW say about BMW? Even in the face of a great depression, even when tasked with designing basic transportation, a BMW was a premium motorcycle at a value price.

This particular 1932 R 2 /2a is Evan Bell’s, the owner of Irv Seaver Motorcycles, first BMW. After just two weeks on the job, he bought it from his new boss, Irv Seaver, in mid-August of 1959. He still jokes about some of the ‘new guy’ work he got to do for his $1.00 an hour, like rushing through Cushman tune-ups to get to work on “real” bikes and the smell of the dairy farmer’s bike. Who could have guessed that over fifty-five years later he’d still be doing the jobs here no one else would (or could) do.

Helping Irv haul home a collection of old bikes was a job that seemed to suit this young hot rodder well. Chuck Pollard was a CHP motor officer who had been collecting bikes for many years, filling up the family farms’ out buildings as the farming wound down. Chuck Pollard is also kindly remembered by the “young men” of Evans’ generation for starting car clubs at the high schools and helping to get one runway of the Orange County Airport (now known as John Wayne Airport) closed on Sunday afternoons to take street racing off the streets. These were the first organized drag races (starting in 7/2/1950, 10 years before Lyons in Long Beach), a program Evan, and his brother Frank enthusiastically participated in. Chuck's son recently gifted Chuck's OCMC race jersey from the ‘40’s, we framed it and have it on display at the shop.

Irv bought Chuck's whole collection, building a large, two story barn at his home in Lemon Heights to house them. Many of them ended up in either Steve McQueen’s or Bud Ekin's collection. They would come out most Friday afternoons, frequently with Ken Howard (Von Dutch) also crammed into the cab of Steve’s ’46 Ford truck to buy one or two per week for many years.

Irv was a keen vintage bike enthusiast, even before he bought the dealership in 1953 from Judd Carriker. Irv traded the award for the oldest bike ridden to the AMA Death Valley Gypsy Tour with Dewey Bonkrud, an employee of the shop since the 1930’s and a Trailblazers Hall of Fame Member until Dewey clinched it with his 1909 Indian twin.

In hauling this cache of vintage exotica, Evan became enamored by this BMW R2, and a shaft-drive Indian. The Indian was pretty complete and was soon a (slow) runner and only stayed in the stable a short time. On the other hand, the R2 became a bit of a fixture in Evans’ garage. He rebuilt the transmission “because it was there.” Much was not there, and he sent two pictures to the BMW vintage club asking for whatever you don’t see. Nothing came from that request, though we got a kick out of seeing the frame picture show up years later on John Lackos’ excellent website www.beemergarage.com labeled ‘sometimes you don’t find much.' It did change hands a few times, going from Evan to Bob Livsay, from Bob to Damon Richie, a well-known bike painter. By some accounts, Damon originated the R90S Daytona orange smoked paint and we know first hand he was the painter of the ’73 Rob North framed, Udo Geitl built, Reg Pridmore piloted BMW F750 GP bike (reportedly 104 rear wheel HP and a very verifiable 310lb starting weight, clocked at 165 MPH at Daytona, also in Evans’ collection and to be featured later in this series). Evan purchased or traded it back from Damon and, years later, sold it on to a Sterman flying photographer, Michael Rupp. After making more progress than all the others combined Michael traded the still incomplete R2 back to Evan for a rebuild of his R69S after 4 or 5 years. When we finished the restoration, we E-mailed Mr. Rupp a picture. He had recently sold the still healthy R69S, but is still riding a 1960’s R50/2 he bought from us and (we noticed) recommending our service department online.
Back ‘home’, and now with nearly 50 years of experience and a few more resources at hand a goal was set to finish it in time for Evan’s 50th anniversary. Approximately 50 years with Irv Seaver Motorcycles, his wife Lois, and infection with the BMW bike bug.

You can see the 1932 R2 and many more vintage and classic motorcycles at Irv Seaver BMW in Orange County, California.  Whether you ride a super modern BMW Motorcycle or a decades old classic, we are one of the few dealers in the nation that welcomes all BMW Riders.  Come by for outstanding deals on New BMW Motorcycles, or an extensive, technician checked Pre-Owned selection.  Irv Seaver BMW is proud to have one of the top nationally ranked Service Divisions.  No matter what your moto-desires are, Irv Seaver BMW is there to make and keep you very happy. 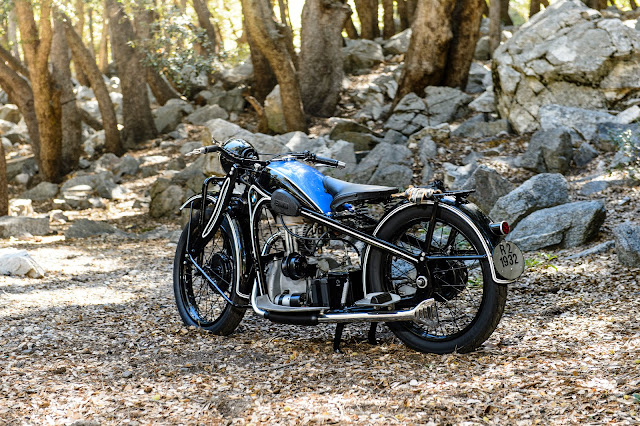 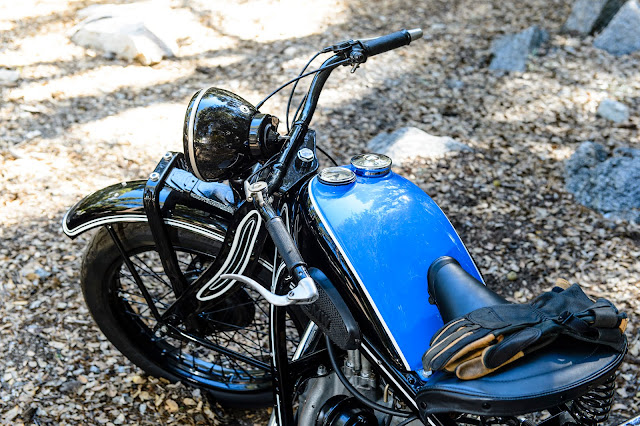 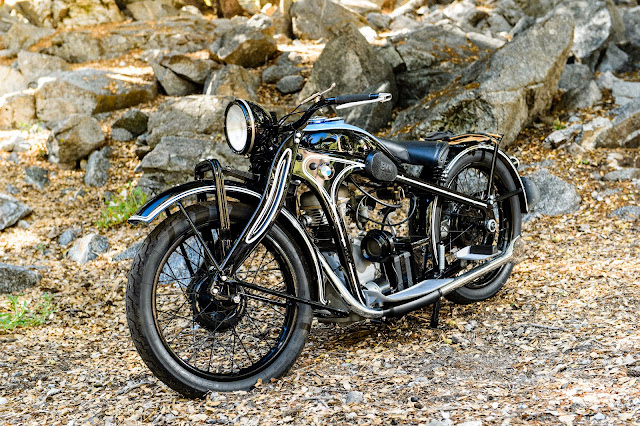 Posted by Irv Seaver BMW at 2:44 PM No comments: